The Ten Commandments of ham 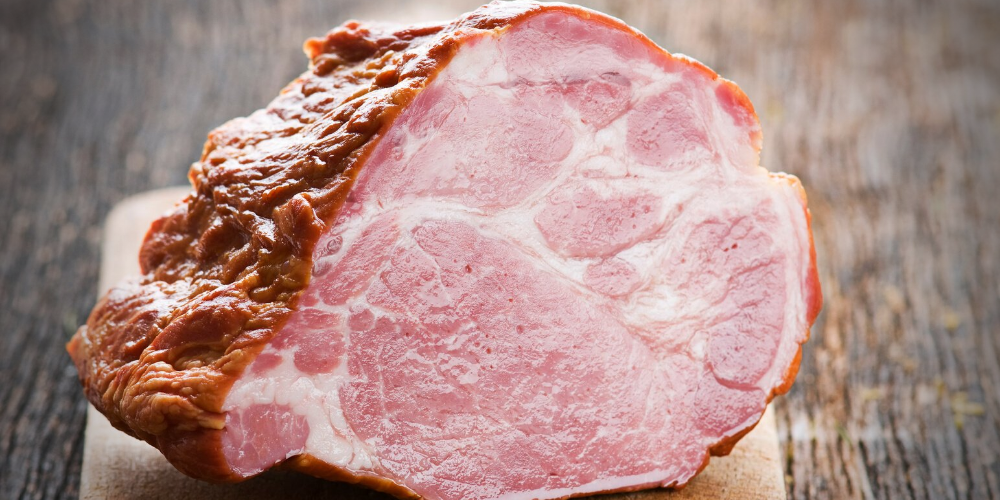 A good ol’ sugar shack-style maple syrup ham is hard to beat! Imagine if, on top of that, you could let it cook slowly on the spit while watching it caramelize more and more as you enjoy your favorite drink… We’ll have a lot of fun with these Ten Commandments of Ham because, as usual, I’m sharing my secrets, so you can make the best ham of your life!

Without further ado, let’s get started!

To make ham, you need to use pork butt. It could be just as good with pork shoulder, but it wouldn’t be a real ham, so we’ll stick with the butt for today.

You can make ham with part of the butt or a whole butt, boneless or bone-in, depending on what you want to achieve. I like to ask my butcher to cut up a whole buttock into a toupie-style because that way the piece of meat is ready to be injected. The piece will hold together just as well during prep as it will during cooking.

There are many ways to cook ham, but if there’s one that I think outshines the others, it’s rotisserie.
By letting the meat slowly rotate, the crust that will form around it will be indestructible. The point of roasting (what you do with a rotisserie) is for the fat to run evenly over the meat, perfectly caramelizing it. If you’re feeling wild, you can even brush maple syrup on the meat about halfway through cooking, but I’ll tell you about that later.

Personally, when I use a rotisserie, I also use the House of BBQ Experts Smoker Box to give a woody flavor to the food on my BBQ.  I would recomment leaving the lid open during cooking for easier access to the Smoker Box.

If you prefer, you can also cook your ham by placing it in indirect heat, on the grill of your BBQ or your favorite smoker, and let it cook slowly between 225 and 325°F, depending on the time you have. One temperature I am particularly fond of: 275°F.

Although your pork butt will still be delicious without an injection, it requires essential ingredients such as salt and nitrites to transform it into a ham. At House of BBQ Experts, we have injections specifically designed for ham.  I highly recommend Butcher BBQ’s Sweeter than Sweet brine mix for ham and bacon. You definitely can’t go wrong with a mix made by pros like Butcher BBQ!

Personally, though, I would recommend halving the recipe on the bag because, though it makes the bacon super tasty, it can make it too salty if you use even a little too much. By diluting the product, you can inject more without altering the taste and end up with a nice, big juicy ham when it’s done.

There are several rubs that you can use to season your ham, but if I have a favorite to recommend, it’s no doubt the Sweet Kansas spice mix and rub from House of BBQ Experts. This rub was specially designed to caramelize the meat and give it a phenomenal crust. If you add maple syrup to your meat at the end of the cooking process, you’ll have the best of both worlds!

Once you’ve cooked your beautiful piece of meat, it’s finally time to eat it! And since it’s a big piece, it’ll take you several meals to finish it. But there are many quick recipes you can turn to: sandwiches, salads, pizzas and any other meal requiring protein.

With pork, I generally recommend using a softer and sweeter wood, like maple, apple or cherry. While I say that, you can of course choose a more flavorful wood, like oak or hickory. But it might change the flavor of your dish, which I imagine you generally prefer to be sweeter. Conduct tests, develop your preferences, and once you find your favorite mix, buy a bigger bag of wood chips!

For a ham that you plan on reheating later in the week, it’s best not to overcook it the first place. Bring its internal temperature up to around 140-145°F. However, if you want it to preserve it longer and serve it immediately, cook it to an internal temperature of 160°F.

Nitrite is the ingredient that turns butt into ham, flank into bacon and brisket into smoked meat. Without it, your ham winds up as pulled pork (very good pulled pork, mind you!), but the texture won’t meet your expectations. So, follow your recipe carefully and make sure you don’t confuse “nitrites” with “nitrite salt”!

When the cooking time is nearly up, it’s time to baste your meat with your favorite liquids. Careful! If you start basting too early, the sugar will caramelize and then char, which won’t give you the result you’re looking for.

I recommend waiting until the last hour, lowering the grill’s temperature and basting your ham every 10 minutes to form a nice caramelization. You can use a good red ale, Jack Daniel’s or maple syrup as your basting liquid. Feel free to add your favorite BBQ sauce at this time, but remember that the sweeter it is, the more it can burn! So, if you want to use your favorite sauce, only add it in the last 20 minutes.

When the time comes to slice your ham, you’ll thank me for making you think about getting a good knife!  Having a long ham/brisket knife will allow you to easily and safely slice your favorite pieces of meat.

In my opinion, this is a good all around chef’s knife for quality and price:

If you want to treat yourself with the best of the best (it’s what I work with!), I recommend this one:

On that note, I can’t wait to see pictures of your grilled creations by tagging us @bbq.experts on instagram!