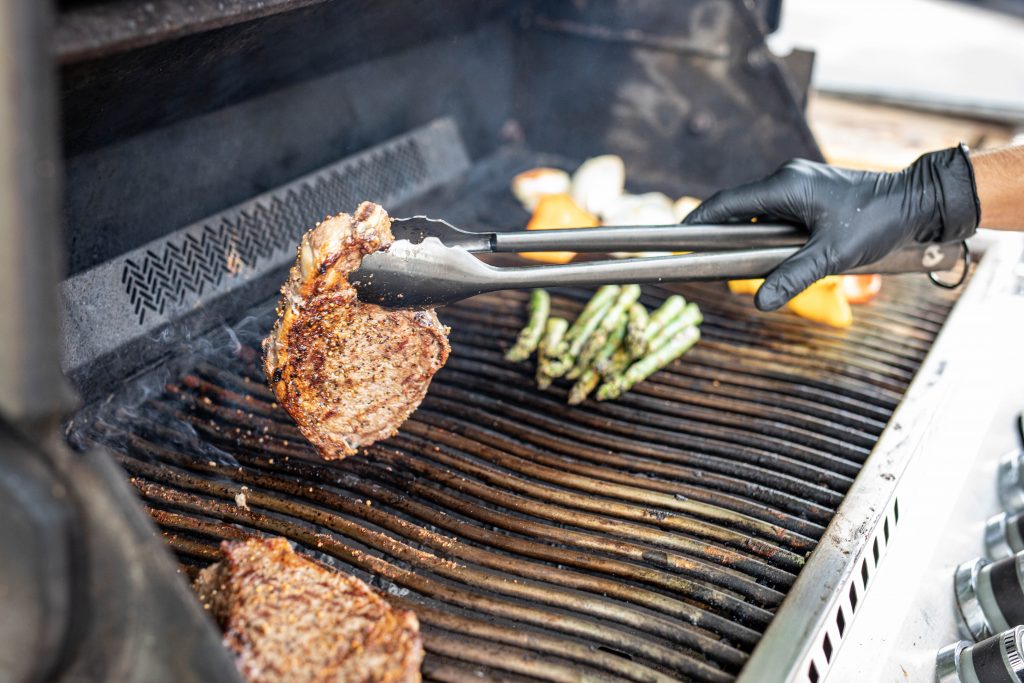 Hosting a cookout is an art form.

It’s something that can take a while to master, but one thing is for sure: everyone always has fun, every time. And by everyone, I mean both the host and the guests. Plus, WORST-case scenario, well you get some good steaks out of it. 😜

In short, whether it’s the holidays, Canada Day, Father’s Day or any other occasion, hosting a cookout is always a win. (I would like to point out that you can grill 365 days a year! 😉 )

What’s so special about hosting a cookout?

In my opinion, it has a more relaxed feel. Everyone’s happy, everyone likes BBQ. It smells great when you walk in… It’s both a little edgier because it’s out of the ordinary, but it’s also more relaxed because you can take it easy. Grilling isn’t supposed to be stressful; it’s an easy-going cooking method.

What’s also nice is that even if you try something new and your pork is overcooked, for example, it’s still salvageable. Just add a little more sauce, lower the grill temperature, and you’re good to go. Hosting a cookout is a way to make sure you’re always eating something awesome. 😉

How do you introduce someone to a “grilling event” when they’re new to it?

If someone has never tasted anything cooked on the grill, no big deal. Just tell them they’re about to have the best thing they’ve ever tasted! 😜 Grilling is a different way of cooking—one that’s super convivial and that everyone loves. Grilling awakens all the senses.

It gets your sense of smell through the smell of the meat cooking, the wood, the summer air… (I could name 17 things you smell when grilling!)

Then, as far as sight is concerned, well, you see a beautiful BBQ that sparkles in the sunlight, a superb piece of meat cooking, a forest or lake in the background, a bunch of people smiling around the grill…

Then your hearing catches the sound of flames crackling, meat searing, the noise of the little bubbles that form on the meat and so on.

And finally, snacking is simply an emotional moment. Food cooked on the grill is the best thing in the world.

All the senses are enhanced x20,000 when you cook on/near the grill! 🥰

Grilled food is simple and effective. Plus, it happens outdoors, so there are no lingering odors in the house. 😉

If, on the other hand, the person has already tasted grilled food but has never been invited to a BBQ potluck, where they are expected to bring part of the meal, that’s different. My advice is to not bring anything too complicated and to base your decision on what others are bringing. Knowing the theme is a must because it’s really hard to cook a meal for everyone when no one has planned the cost and the food doesn’t fit together. It’s like if everyone brings a steak, but one person brings a brisket; it changes the cooking time significantly. Or, let’s say people bring lamb, shrimp, raw vegetables and large pieces of meat. It’s hard to create a cohesive menu.

Also, personally, I find that when you’ve been invited over for a meal, it’s always nice to bring a host gift. It makes the host happy, especially if they can see that you’ve given it some thought. When someone goes to the trouble of cooking something special, I think it’s important to give them something you’ve researched. But that’s to each his own.

How do I host a cookout?

I generally like to keep it simple. I like to set up stations. I put food out all over the table, so people can put together their own burgers, for example. That way, everyone’s happy and involved in the process. It also saves me from having to make 46 myself and allows me to enjoy my own party more.

The way I host my family and friends is not much different. I do it in a similarly fancy way in both cases—I always try to be a good host. 😊

What are some unique ways of hosting a cookout?

An essential of the grilling lifestyle for me is the exchanging and sharing. You don’t want the same person hosting all the time with the same menu because it’s the only thing they’ve mastered. No. What you can do to avoid this is to organize a grilling competition.

For example, hold a competition for who can bring the best steak. So, if your buddy is always bragging about his favorite butcher shop, well, it’s his time to prove that that’s where they have the best steaks in the world! 😏 Everyone is going to bring their best steak too, so you won’t get the “I couldn’t find anything, so I just grabbed this.” And you won’t have to put a steak you bought on special at the grocery store with pepper all over it on the grill. 😂

You can even work out who brings what. One person can bring a Wagyu steak, another a Canadian steak, another an American steak and lastly a grass-fed beef steak. You all know you’re going to eat something good, but you’re going to have to serve it in a way that will surprise the others. It keeps things fun and super interesting. It’s like a steak night version of a BBQ potluck! 😎

Otherwise, something different you can do if you have a plancha/brasero-style BBQ is really tap into the social aspect of grilling by having raclette. Sunterra’s “fire table”-style BBQs, in particular, are perfect for this. Everyone sits around the BBQ, cooks their food directly in front of them, and then enjoys their meal on the little “shelf” that runs around the grill. It’s really cool and increasingly trendy. (In Europe they even make “grill huts”—it’s crazy! There’s a BBQ like this in the center of the shack, with a hood on top, and everyone eats there. 😳 Unbelievable!)

Another way to make a raclette is with a salt board. It works great. You heat it up on the grill or in the oven, then put it in the middle of the table on your raclette machine and let people use it to cook their food. It stays hot for a long time; the heat transfer is really efficient.

Otherwise, if you want to go the more “I put out a bunch of stuff on my island and let people help themselves while they wait for the meal” route, offering smoked salmon is a good option. You can have it smoked ahead of time and serve it in little “blocks” or “slices”. Alternatively, seared steak made into a tartar, or Rockefeller oysters with mignonette works great.

What’s the best BBQs for hosting large groups of people?

The first thing that comes to mind is charcoal grills. They create a buzz outside and always produce good results. You can take the lid off and watch the food cook. Everyone gathers around the BBQ, and it really creates a “social grill” effect.

After that, as I said earlier, the Sunterra “tables” are really the”best. Argentinean grills don’t have as much of that social side to them, but they are still pretty cool. Imagine: you walk into a party and you see an Argentinean grill with lots of food on fire. You’re like, “Oh dannnnnng 😎”. It’s cool because you can have a lot of fun with a BBQ like that. It’s not complicated—you can make art! You can hang meat, then have something smoking underneath while other foods slow cook and grill. It makes for a damn good show. 👌

If you often host a lot of people, a bigger grill is definitely preferable. For example, a 26″ instead of a 22″, or an XXL Smoker will make things a lot easier. I know that you have to work with what you have, but as far as I’m concerned, a 22″ grill is more like a family-sized grill. If you need to pile a lot of food on it, it’s going to be a lot more complicated.

Accessories to have for the event

What I would say is really essential is a good, sharp knife with which to cut the meat. When you’re hosting, you don’t want to go through the hassle of making 25 burgers (having done it a lot, I can tell you it’s not the most enjoyable thing 😩 ), so it’s best to prep a big piece of meat and cut it up before you serve it (just do it—it’ll save you dishes! 😝). With a good cutting board and a great knife, you’re going to be all set, and everything will go well.

Also, giving your BBQ a good cleaning before cooking on it is a must. If the bottom of your BBQ is dirty, there may be flames later, and if the ash in your charcoal grill, for example, hasn’t been emptied, you may have a hard time controlling the temperature and getting good airflow. Also, make sure you have enough fuel; it would be a shame to run out of gas when you have to prepare food for a whole crowd.

When you’re ready to send out your invitations, you’ll just have to decide what to cook. Here’s a 4-course menu idea you can make:

Cheese-stuffed meatballs are always good. Just grill them, serve them with a little sauce, and you’re good to go. They’re easy to make, effective, and don’t require too much handling. Stick a toothpick in each meatball when you’re ready to serve and BAM! The plate clears itself.

(By the way, you can even make them super ahead of time and freeze them. So, they’re a great option to have on hand.)

Salmon. I might not have said this 10 years ago, but now everyone loves it. You cook it on the salt board, slice it (with one of your cheaper knives so as not to damage your best knife!) directly on the salt board in small pieces and serve it as is in the middle of the table while it’s still warm or, in little serving boats. In both cases, the end result is great.

Turkey drumsticks are always good (they’re like a full meal!). They can be incredibly appealing, too. If you cook them slowly, hooked on a “brasero” rod or Argentine grill. YUM! 😏

You can even cook meatballs, asparagus, potatoes or whatever on the grill below. It really has the “wow!” factor.

Otherwise, if you’re less experienced at grilling and don’t want to give yourself a hard time, a not-so-tartare beef tartare is really fun to make and serve. You can make it ahead of time and if there’s some left over later and your guests are hungry at 9 p.m., as long as it’s fresh, they can go back for seconds. 😉

Grilled fruit with Cake Spice Mix is always good, no matter which fruit you use. You can make your mix according to what’s in season: pineapple, apples… Whatever you like!

If you want something fancier, you can also take a banana, make a slit, then add chocolate, marshmallows, etc. into the opening before you grill it. You can make it super easily, and it’s excellent (I invite you to make the bananacoureurdesboisoreo recipe if this concept appeals to you 😉)

Anyway, I think what’s really interesting is putting together a menu that allows you to enjoy your event as well. (I know you love your BBQ a lot, but clearly you want to spend time with your guests if you’ve invited them to your home. So, keep things simple and efficient 😉) At the end of the day, what’s important is that everyone is happy, including you. 😁