Blog
Home | Blog | Living it up Hawaii BBQ style: the trip of a lifetime

Living it up Hawaii BBQ style: the trip of a lifetime 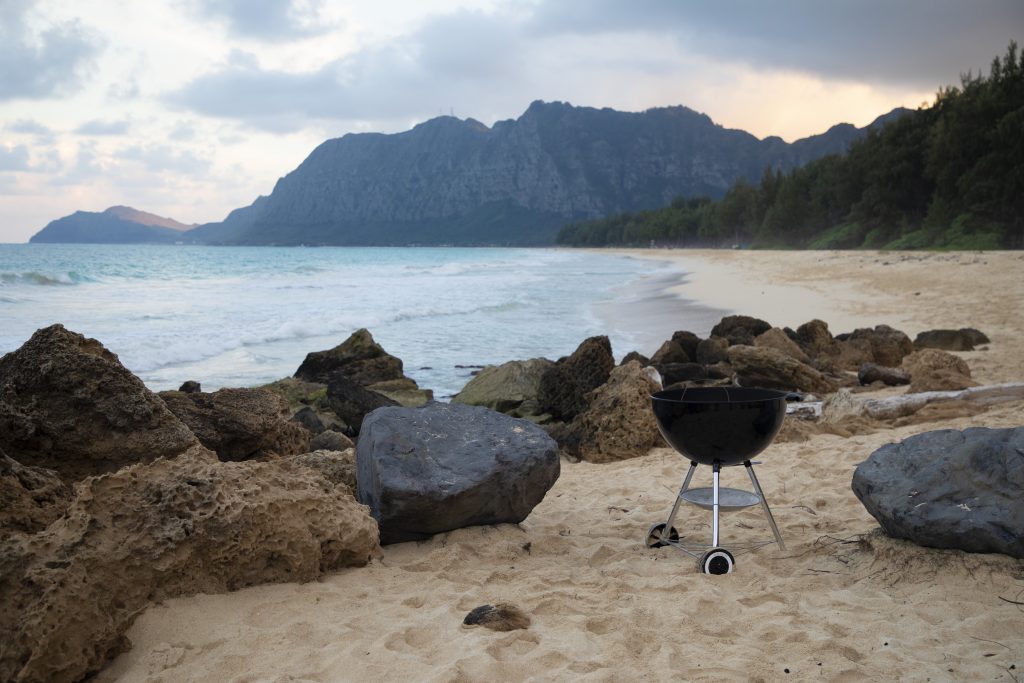 In 2018 the House of BBQ Experts crew headed out to Hawaii to engage in a trip made up of good barbecue, learning, different culture and fun. We wanted to tell you all about what we discovered, the types of foods we grilled and everything in between. For us it was all about Hawaii BBQ, travel, exploring and having fun. 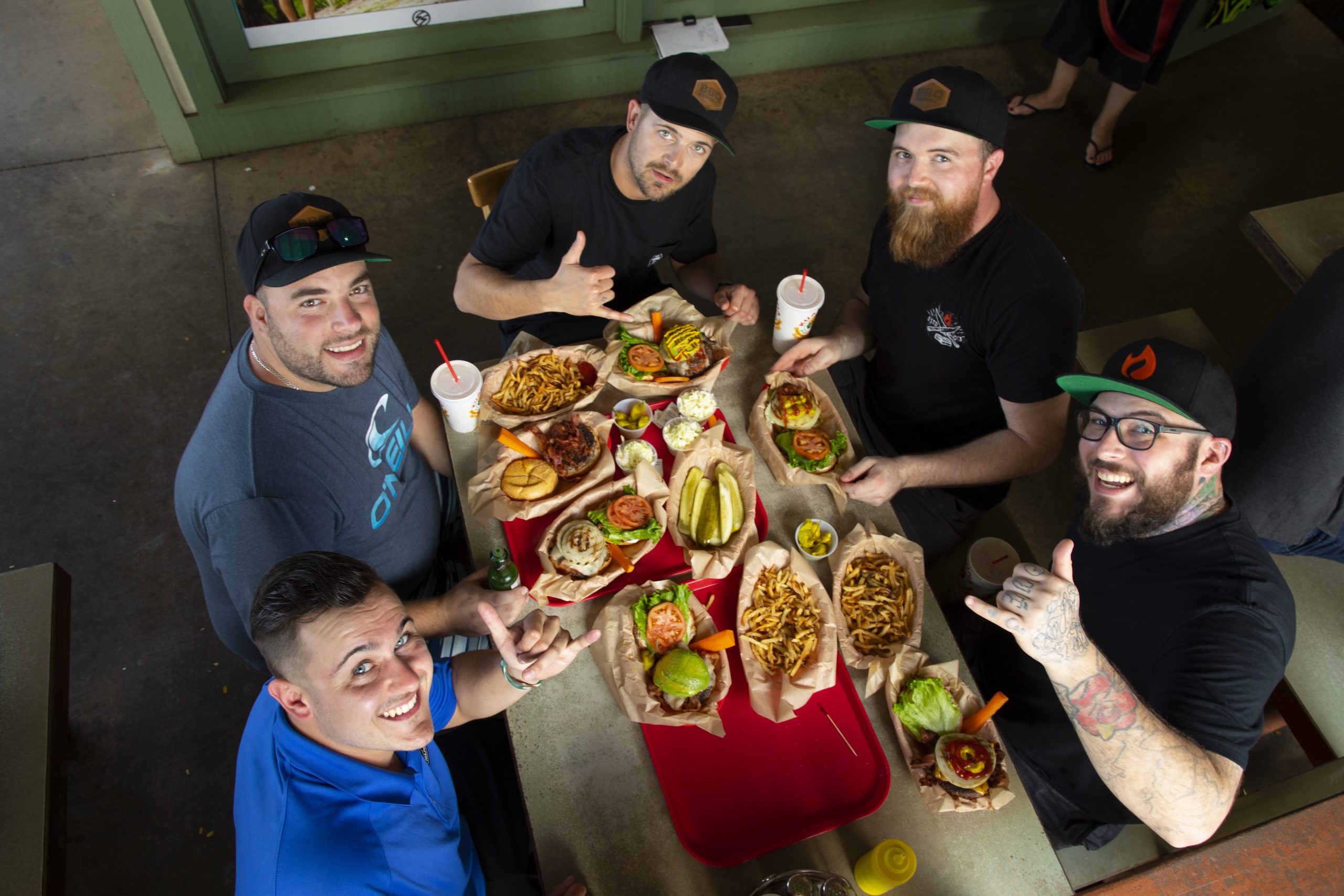 If you’re the kind of person who’s uncomfortable on the Highway, or you like the fast acceleration of your sports coupe, Hawaii roads might not be your cup of tea. Tight bends, blind spots and narrow streets are part of everyday life.

For the trip, we booked a 7-passenger van. Only by asking the rental company clerk (probably with our founder Max’s convinced and relaxed look) did we get equipped with a 7-passenger SUV extended version. Let’s goooo.

As soon as you leave the parking lot you realize that there are very little stop signs in Honolulu. They are replaced by pedestrian panels. Stops are only necessary when there are pedestrians, but there seems to be almost no red signs in sight.

You can drive several dozen kilometres before you see one. That’s why we didn’t really encounter any traffic on Oahu Island. Traffic is fluid, but speed limits vary between 15 and 45 miles per hour. We don’t stop, but we didn’t drive fast. There is a reason: the streets are very narrow and winding everywhere.

The problem is that everyone wants their home or business with the best view in the world. I also want my window at work to be looking out into a perfectly blue ocean.

Beauty every which way you look

So on one side there is water and on the other side there are buildings. All along the ring road. The streets run along the ocean, but no railing separates you from the sea. The advantage is that without ever turning you can literally explore half the island.

Every restaurant, every shop, every house and every business share the little space this island has to offer on the water’s edge.

In the morning we’d hit the road. As we left the yard, we headed north. Without stopping, one can reach the end of the island in more or less one hour. But it took 12 hours because we stopped at everything the island had to offer: beaches, snacks, restaurants, food-trucks, parks, shops, etc.  A wave even washed away my sunglasses at 11:00. By 12:00 I already had my new pair.

Everything is close to everything. Everything is tightly woven. We could see that many people sold their backyards to allow someone else to have a house by the ocean. Most people have very small lots. 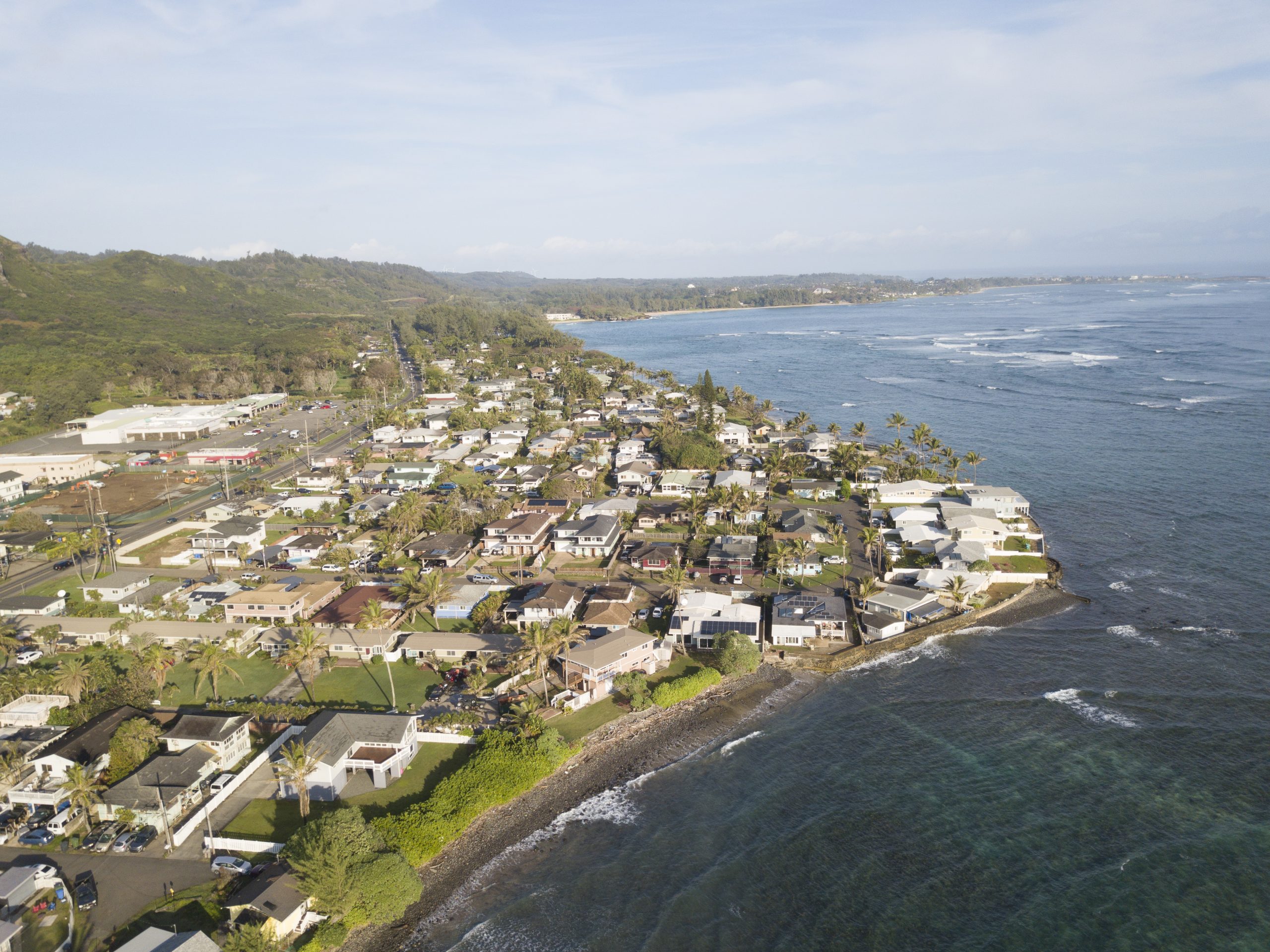 Parking lots are designed for compact vehicles, but most people have SUVs. To make the situation worse, I was driving the longest SUV available on the market. I became slightly aggressive when the time came to find parking.

However, once stationed at a strategic location, one could explore a general store, a “shaved ice” shop, several restaurants and food-trucks, surf shops and a tattoo shop operated by Hawaiians. We spent three hours exploring less than 500 metres of street. A lot to see, taste and smell.

Another big “problem” of the island was the landscapes. We sure did have life tough! They are too beautiful, captivating and hypnotizing. We had to keep our eyes on the road despite the view of the grandiose mountains and spectacular scenery. Healthy bright green trees just like what you’d see in the Lion King.

Wild chickens doing whatever they want

Keep an eye out for wildlife too. There’s no bear or deer here. On the other hand, there’s thousands of wild chickens that literally run around the streets, parks and parking lots. They’re not really stressed by life so you have to wait until they leave you the road!

We met turtles, ducks, chickens, pigs, a donkey, horses, dogs and cats. They all walked as they pleased, walking right in the middle of the road. Our lesson was to be patient.

The people here are clearly more patient than most people.

“Aloha is a lifestyle” and it’s not wrong. When you wait to cross the street people will gladly stop without you having to signal your intentions and they will let you pass. Since there are very few stops, people will also simply stop to let another car pass, even though they are under no obligation to do so.

If you really want to enjoy your drive around the island, just don’t drive! 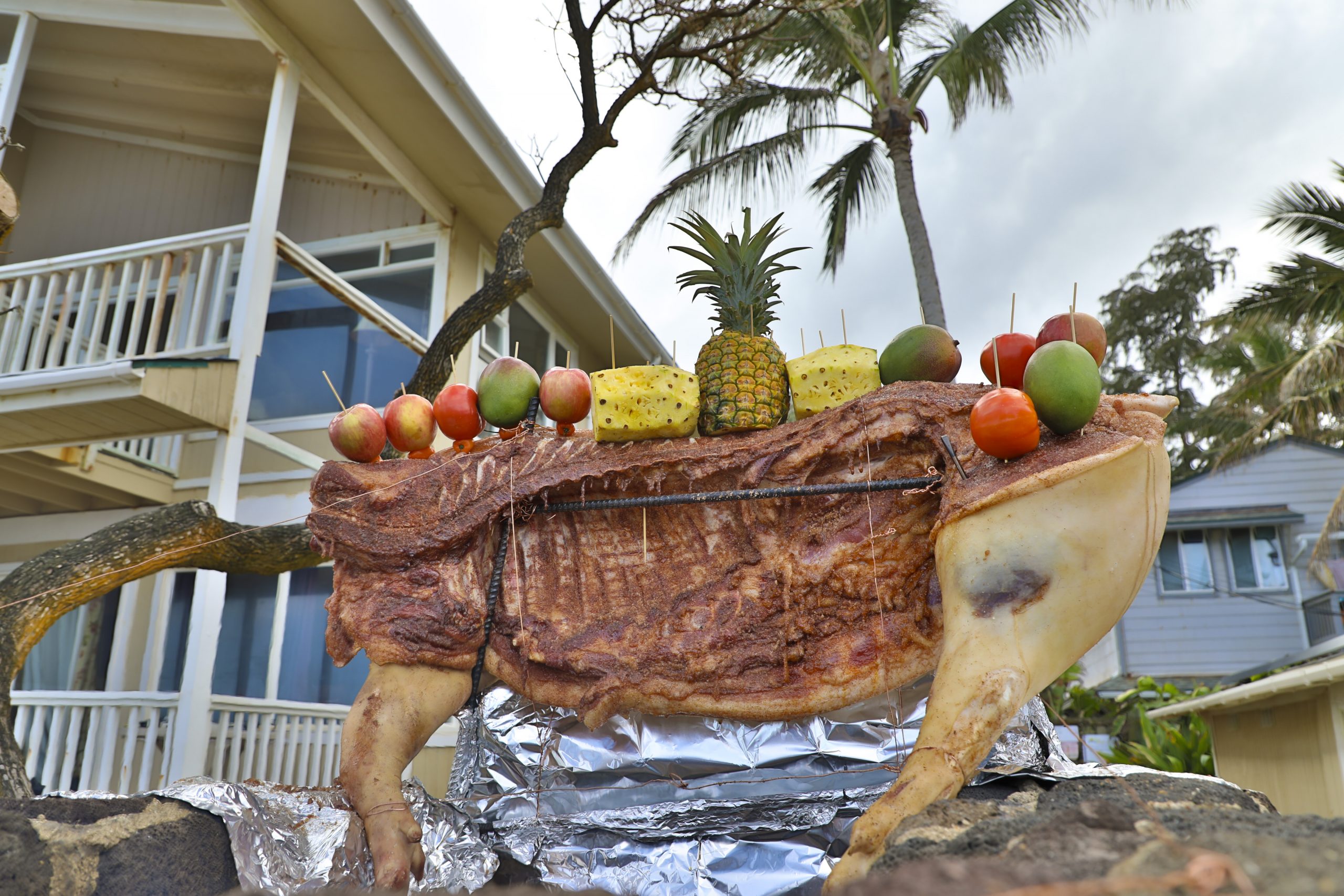 The goal of coming to Hawaii was obviously to escape the Canadian winter, and letting our friends and family shovel our driveway in the dreary cold. Haha! Just kidding.

When we arrived, we realized that the weather was perfect to film BBQ shots! Hawaii BBQ shots, to be precise!

Our photographer, Zach, is definitely passionate about photography. We constantly heard him say how much he would like to immortalize this mountain or tree with his “Kodak”. He was really looking forward to starting work. I get that: Hawaii is so beautiful that you have to be there to believe it. Mountains are intimidating and almost mysterious. And the grass is greener than your neighbour’s.

We arrived with a lot of equipment. Four cameras, five different lenses and a high-performance UAV with 4K shooting capabilities. That means a lot of Hawaii BBQ shots.

We were able to film our BBQ prowess such as the pig by the sea, tacos with local fish and a chicken Huli Huli. We really managed to capture the spirit of Hawaii’s BBQ and lifestyle.

I practice amateur photography myself at my hours and Zach taught me several very interesting tricks about focus, light, filters and lens styles. I managed to take several pictures, so I’m quite proud.

We also took advantage of our presence in Hawaii with a photographer to take actions shots of us at paintball and golf. You’ll see, I clearly look like a top-level athlete (but only in pictures).

The paintball court itself was regular. However, its location was actually a spectacular attraction. It was inside an American military base and you had to be American to access it.

Our cofounder, JP, negotiated for us, and one of the soldiers agreed to vouch for us. The field is at the end of an old World War II airstrip on the American base in Hawaii. Our opponents were all Marines on leave. For a bunch of novices, they were pretty impressed with our performance. They were very welcoming, and they even allowed us to play a few games just between us. 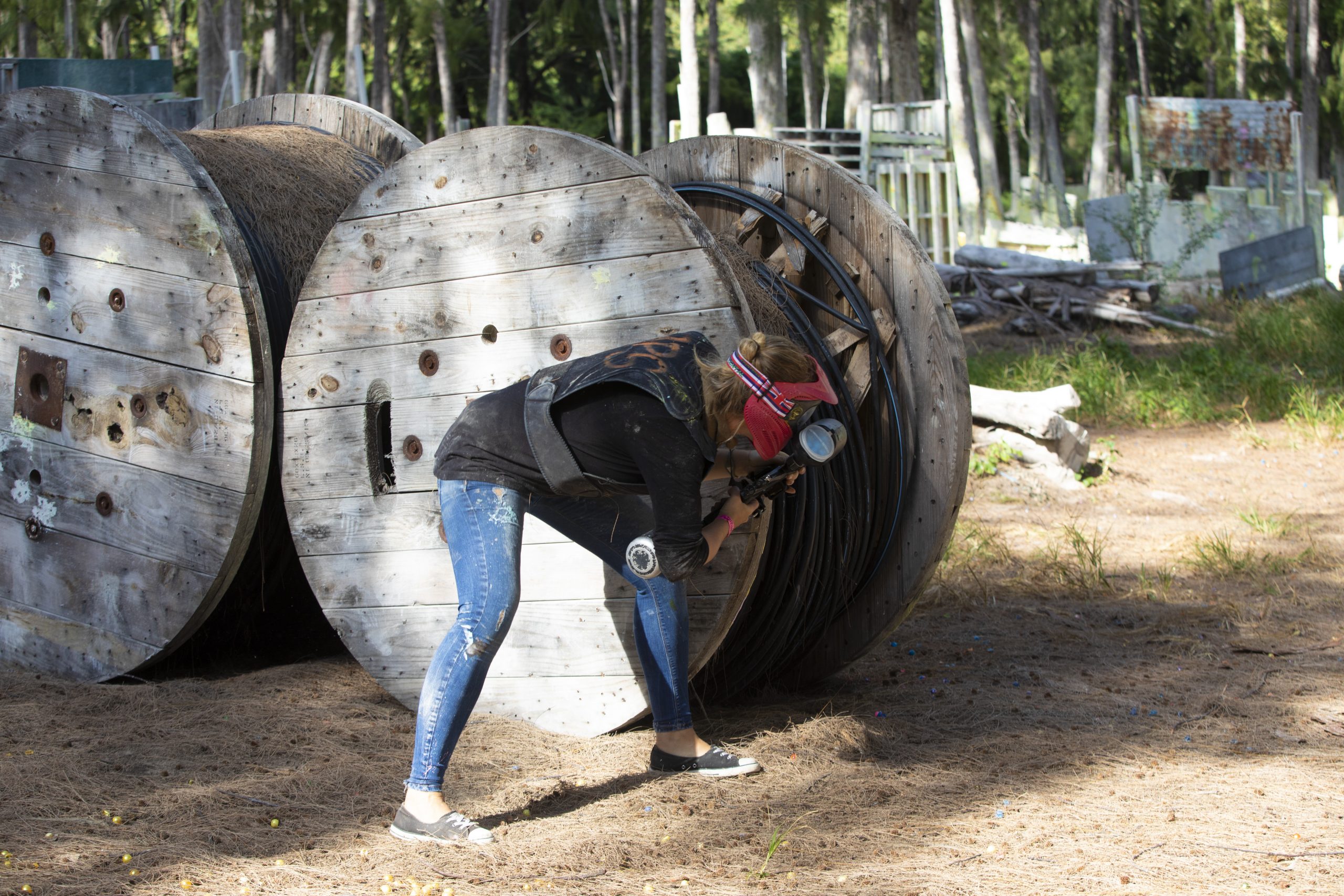 Our golf game was also an awesome experience. We used the drone to the maximum to see the breathtaking panorama that we had as we rolled around in our cart. The 4K lens allowed us to see the smallest details, even when it was several tens of meters above our heads. But my favorite use of the drone was when we filmed our second cottage by the sea. I’m not the type to brag, but you’ll be jealous. That’s a promise.

As most of you will not have the chance to have a professional photographer during your trip, I strongly suggest that you get a good camera and, especially, read the guide that comes with it. You won’t regret it, and your memories depend on it!

During the first four nights we stayed at Tradewinds Ranch. It’s a very nice and big place. It’s a site of several chalets including a shooting range, a stable, a pond, a playroom, pastures for horses and their own houses.

The animals were on semi-liberty on the ranch. A large fence went around the field and allowed the pens to be left open so that the animals could move around as they saw fit. Every morning we had to wait for a donkey or a duck to clear out from the small dirt road.

One of the most interesting things about this place were the neighbors. There was a meditation center run by monks, but the sacred Kaliuwa’a falls was the most impressive. I like to think monks are the guardians of these falls.

The sacred falls were named after half of a god, Kamapua’a. He was very unpleasant to the islanders and looted their supplies of cane sugar and sweet potatoes. One day, the inhabitants got tired of him and wanted to drive him off the island. He took refuge in the forest where he started making a canoe to escape. Legend has it that when the citizens found him preparing his escape, they prevented him from finishing his boat and he had to flee.

That was the last time they saw him. The incomplete boat would have had a leak that would have created the falls.

Paying respect to the tragedy of 1999

I wish I could tell you that those falls were beautiful, but we couldn’t see them. In 1999, there was a landslide on Mother’s Day. More than 30 people were seriously injured and 8 people lost their lives.

The families of the victims sued the state of Hawaii for failing to ensure the safety of visitors. Since then, the site has been closed to all visitors and it is strictly illegal to enter. You could feel the indignation of the locals when you asked them if it was possible to go and if it was worth it. It is still the greatest tragedy this island has ever known.

One morning, we went to meet one of the monks who told us again that it was disrespectful and very dangerous to go there. We asked him then if we could fly our drone with perhaps the hope of seeing the fall. The Monk kindly pointed us to a large place not far from where we could take our time and try to see the fall.

After several minutes of flight, the drone began to react badly to the controls, but it still worked. Later, he stopped in the middle of the flight and started coming back to us. Our cameraman didn’t know what could cause this. When the drone came back over our heads, it started coming down to land. Can’t move it with the remote. The truck had to be backed up because it was going to land directly on the hood.

We told ourselves that the semi-god had had enough of tourists and that he decided to send the drone back to us.

All in all, our Hawaii BBQ trip went beyond what we could have asked for.