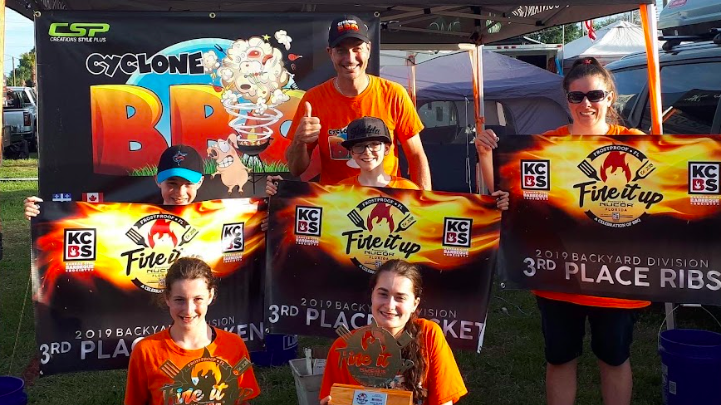 Cyclone BBQ is a family BBQ competition team (you may have seen our name and our team sporting orange shirts in several competitions in both Canada and the United States) that also offers homemade food products.

We share strong family values, as does BBQ Quebec, and are very pleased to have them as our official sponsor for the 2022 competition season. (Thank you!)

And because we believe our journey could inspire you, we decided to share our story and “what competing as a family is like!” 😉

We, Josée and Patrick, are Cyclone BBQ. For over 28 wonderful years, we have shared our lives together day after day, and out of our union came 6 amazing kids.

For many years, we lived in “family” mode, a mode that became increasingly important and left little room for hobbies. Nevertheless, our desire to cook diverse and quality dishes was part of our way of life. Barbecuing was always a part of it, but in its most basic form. Because time was so precious, food prep and cooking had to be simple.

In 2017, while watching the American show BBQ Pitmaster, it suddenly dawned on us. “There’s such a thing as barbecue competitions!?” After doing more research, we realized that not only did barbecue competitions exist in the States but in Quebec as well! That Canadians, like Quebecers, were taking part in this type of culinary competition event! (Sure, you could call them “underground” if you consider that they don’t have the same “prestige” as the French fine dining competitions, but they still exist!)

Anyway, we had kept it in mind, and then—still in 2017—we treated ourselves to a little romantic getaway. Now that our kids were older, it was our first getaway in a really long time, so we were planning on resting in Plattsburgh, New York. But hey… As long as we were there, why not take the opportunity to visit Lake Placid, New York, and check out a professional KCBS BBQ competition?! 😏

We attended, and that was all it took to get us hooked!! Seeing the size of the event, watching the many teams (even Quebec teams!) getting ready, chatting with the fans—it really made an impression on us. Everyone was welcoming and friendly. To see all the teams at work, to see their intensity, their dedication and to notice how organized they were, we found it incredible. It wasn’t a hard call—our romantic getaway turned into a full weekend on the grounds! 😆

When we got there, we have to admit that it wasn’t long before we looked at each other and said, “My gosh, wouldn’t it be fun to try this soon?” I mean, with 6 kids, we already had the organization side of things down, and we (especially Patrick 😉) are competitive by nature, so it really appealed to us. Obviously, we also already had a strong barbecuing foundation, so for our new project to materialize, all we had to do was expand our knowledge on the subject.

The Start of a Dream

In 2018, after several months of extensive research and planning, we acquired a competition-friendly smoker (I, Patrick, may have even lied to Josée about the cost at first, so we could work with a properly good machine, but that’s another story, shhhhh 🤫😜). Some TV and internet video watching, a few practice sessions, and boom! We were entering the world of amateur-level BBQ competitions!

Given that this was our first competition, we wanted to avoid putting too much pressure on ourselves. So, we decided to aim for 10th place out of a possible 24. In a surprise turn of events, we ended up 8th overall! 🤩

We were so proud; it allowed us to prove to ourselves that, yeah, we had some improving to do, but we were already doing things well, too. It was encouraging for the future.

The Benefits of Competing As a Family

Throughout our amateur competitions, we have made steady progress. We believe that being a couple in life and working as a team during competitions has been beneficial. Availability, money, individual roles, etc., are all clearly defined. There’s no need to meet to discuss, plan, practice, test recipes, etc.—we do it 24 hours a day!

For instance, we both know from the very beginning that Josée is the one who will be in charge of developing flavor profiles, that she’ll pick the spices, the sauces… Then, on the other hand, we already know that Patrick will be the one to manage the smokehouses. We each have our own timelines, our own roles. We complement each other well, and we have no problem challenging each other if we think of something along the way.

BBQ competitions are a passion for Cyclone BBQ. We’ve had to compromise and adjust, but we believe that competing as a family does have a certain advantage. We know each other so well!

Proud To Be Accompanied By Our Kids

For the first 2 years of competition, our kids (especially the younger ones) accompanied us. It was a whole process! We had to plan everything—the list of things to bring for our competition meals AND family meals. 🥵

Then when we arrived at a venue, the orange Cyclone BBQ team didn’t go unnoticed! Several people decked out in orange getting out of a car, kids running around (like real cyclones! 🌪) visiting their friends’ booths… People fell in love with us because they admired how we didn’t stop ourselves from doing the things we love, even with kids and young ones. Obviously, we perform well too, so people don’t just notice us because of how we look but also because of our talent!

Our family is the Cyclone BBQ story. And, the most touching thing for us is seeing how proud our kids are when they see their parents doing what they love. As soon as a picture needs to be taken during the competition, for instance, they always rush to join us. They’re part of our team.

Our Advice For Anyone Who Wants to Start Competing

Lastly, for those of you who want to get into barbecue competitions, you should always keep in mind that this is above all a hobby.

If you enjoy and are passionate about barbecuing, no matter what your goal is, you’ll always win. Also, remember that your technique and flavor profiles will only improve over time, and in the meantime, there’s nothing more rewarding than being told you make “damn good BBQ”!

to this point. And yet, this is only the beginning of our story…