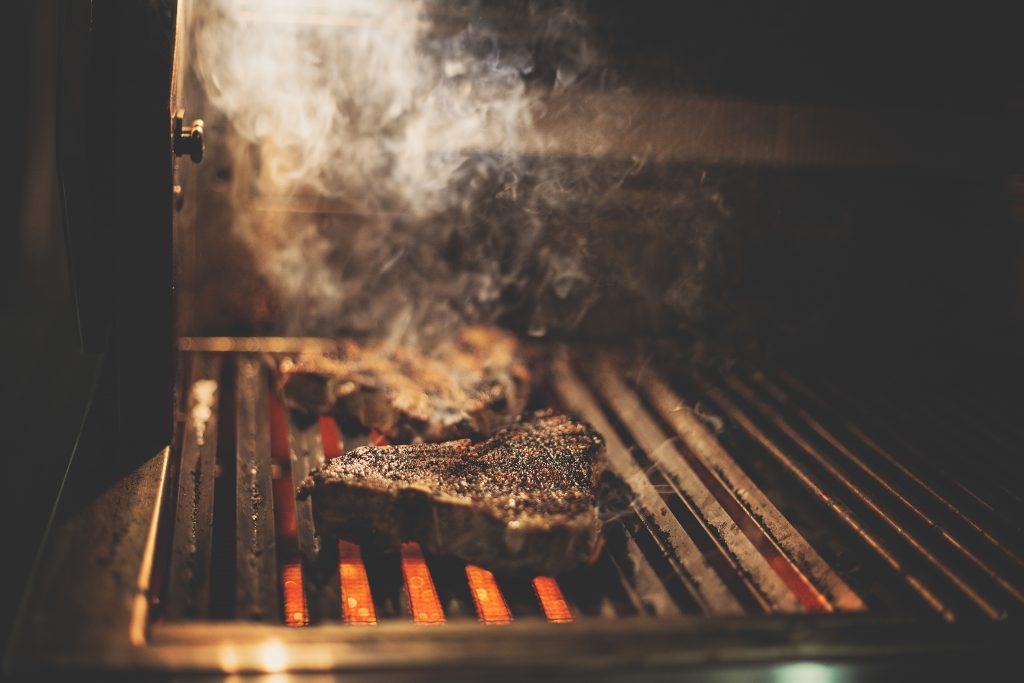 There are several different ways of cooking on a BBQ. The two most common ways are through direct or indirect heat. Or we can call it simply, direct and indirect grilling.

The indirect method means that the food is not directly over the flame. It’s placed on the BBQ grills where there is no flame underneath. The direct method is used to sear or grill food.

There is a big difference between cooking and grilling. Grilling is when you expose the meat to a direct flame in order to caramelize the exterior of the meal without burning it.

Cooking a meal gets the central part of the food to a temperature high enough to eliminate possible bacteria and make it safe to eat. This is done without burning the exterior of meat.

To cook indirectly on a gas BBQ, you start the side burners and put the food in the middle. The heat created on the side will uniformize in the BBQ and create a convection movement. The equal air movement on both sides will create an air flow that will raise the temperature and allow you to cook without grilling.

If you need to grill veggies, you can use the side burner. This won’t affect the meal cooking indirectly.

With charcoal it’s very easy to cook indirectly. Sometimes the BBQ comes with a ceramic tank separator to keep the charcoal on one side. This prevents the heat from traveling horizontally, which makes it easier to control the temperature and the cooking zone. A poker works well to move hot coal in the tank to keep a more defined space if the BBQ doesn’t come with a separator.

We define cooking in terms of temperature rather than time. To achieve perfect cooking, you need to get as close as possible to your desired internal temperature, depending on the cooking you want.

At 160 Fahrenheit degrees, there is no bacteria in meat. We need to reach this temperature to prevent salmonella poisoning. Meat like beef can be eaten less cooked because the bacteria can only be transmitted through the butcher’s blade. For example, only the outside part of a steak can be contaminated. It’s safe for consumption as soon as it’s seared. That’s the reason why you can dry age the meat. The bacteria on the outside part interacts with the enzymes inside in order to break down the fiber and tenderize it.

Typically a butcher will trim off the first layer before selling it to you. Thus, you’ll eliminate all the bacteria when you sear it. You can then eat it blue without risk. That’s also the reason why you have to eat ground meat well done, because the butcher’s machine touched every fiber of the meat and the outside of each piece can be contaminated. Each piece must be 100% cooked all the way through the middle.

On the other hand, if you buy your steak in order to grind it yourself, you can eat your steak blue. That’s because you’ll be sure that the grain hasn’t been exposed to a contaminated blade. There is another way to cook blue beefcake, without grinding your own meat. You can cook it at 135 degrees Fahrenheit for at least 95 minutes. Even if you don’t get an internal temperature of 160 degrees, the cooking time will get rid of the bacteria.

The only thing is that you have to add liquid container so your meat doesn’t dry through the cooking.